I have always known that I had some of the best friends a girl could want in life but I remember a moment about a year ago when I questioned it for a spilt second. A girl I follow on Instagram posted a  group photo of her and all of her friends at a LDS mission farewell for one of the friends. This photo had a caption mentioning how wonderful her friends were for buying her a plane ticket so that she could be there that day.

I was so taken aback by the idea of friends that would pitch in enough money for this girl to come visit home and be at this friend’s farewell. What was it like to have friends like that? Friends who wanted you to be a part of a special moment so bad that they paid for you to be able to do so.

Upon further investigation (scrolling through the comments below), I discovered that this girl had actually photo-shopped herself into the photo because she wished she could have been there. The moment of jealousy was over and I forgot about it.

My friends had planned a trip to San Diego for spring break, staying with my friend Sarah’s aunt and uncle, who I had stayed with on a previous trip the year before. Being unable to find a job in Logan until recently I did not have sufficient funds to afford the trip. It sucked. It honestly did. I had loved my trip there with Sarah the year before and we had some pretty spectacular memories from it. Surfing at sunset being one of them.

So imagine my surprise when my friend Julia facetimed me asking what I was doing for the duration of when their trip was and told me that she had discussed it with the other girls and they wanted to pay for me to come on the trip!

Mind you this was the day before they were going to leave! But after growing up traveling, as lucky as I am, I consider myself a professional packer!

Sarah and I left Logan around 1: 30 to go to her house in Sandy and wait for the others to make their way there.

6 o’clock rolled around and we were off to spend the night with Sarah’s (rich) uncle in Vegas. Now despite knowing that Sarah’s uncle was a very well off man we weren’t expecting to be told, “there are four rooms upstairs that you can pick from.” We had planned on sleeping on the floor or maybe a couch since we would be there less than 8 hours. But you didn’t hear us complaining!

The five of us paired up and slept soundly…. before SOME OF US (meaning me) had to get up and do homework! But such is the life when you leave a few days early for spring break.

While on the road to San Diego made a pit-stop at the 7 Magic Mountains. Better known as the giant colorful rocks you see while leaving Vegas. Let me start by saying these things are FREAKING HUGE! I honestly had not seen any pictures previous to the trip so I had no way of knowing beforehand that these rock towers are as tall as they are. My 5’2 stature suddenly felt increasingly smaller. 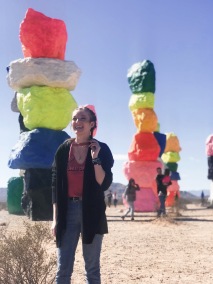 But it’s really a cool spot and the pictures we took were in a word, “bomb.” Taylor is the newest recruit to our little group and had yet to experience a photo shoot with our friends that have photography experience. Sarah’s phone featuring portrait mode, and me, who everyone claims to be sufficient model poser. I just have more experience in front of the camera then behind it to put it simply haha!

We made it to San Diego around five, relaxed, and visited with the Taysom family. I started to not feel well and the girls decided that my lack of drinking water since leaving for the trip had left me dehydrated, and acting very childish. But we don’t need to discuss that.

Old Town is a small part of San Diego with cute shops, gardens, and some of the best food. Our group that included the Taysom family and ourselves went to eat at Café Coyote, a Mexican restaurant in Old Town and it tasted just as good as when I had it the first time a year ago.

Now with our little group of friends including Sarah, Taylor, Julia, Emily and myself (going off of the picture at the beginning) you can’t go a day with out laughing till you have an 8-pack at least ten times a day. So getting ready and going to bed is an event in of itself. We had planned on getting up early to get ready for the next day but it took awhile for us all to settle in, especially Sarah and Taylor who kept bouncing on the air mattress causing the other to jump. I got a video of the event but seeing as I value my life I will keep it to myself!

We finally left the house around 10 and visited Balboa Park. An area with multiple museums, gardens, and historical sites in San Diego and let me tell you, I fell in love. This place had some of the most beautiful architecture that I have had the pleasure of seeing and so many museums that I got light-headed by the thought of going through all of them.

Processed with VSCO with fr4 preset 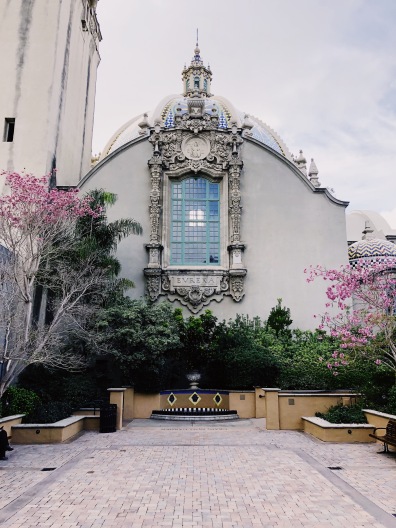 Processed with VSCO with fp4 preset

Processed with VSCO with av4 preset

Good thing we decided not to because they all had entrance fees.

I doubt this will be my last trip to the area though  so I will satisfy my history kink at a later time. 😉

We spent a majority of our day here walking the grounds and having our own mini photo shoot with all of the beautiful area’s. I would highly recommend the Balboa Park grounds for any kind of photo shoot or who knows, a wedding!

After the park we left for Pacific Beach to walk the boardwalk and where we had originally planned to watch the sunset. But cloudy and misty weather (cause San Diego rain is not real rain) prevented us from doing so. Emily and I eventually dipped out and had a fun time trying to find a shop with a restroom that we could use!

With the wind picking up the temperature dropping we left for home where we met with Sarah’s cousin, Lexi to go hot tubbing in their community pool and hot tub. We got super close with her that night and enjoyed every range of conversation topics. Which I know our mutual guests enjoyed considering the smirks they had during our first kiss conversation haha!

The girls and I (including Lexi) started the morning early by hiking at Torrey Pines State Reserve.  The morning was colder than we had expected but it quickly warmed up as we hiked up and down the trails. The cool thing about Torrey Pines is you can hike down to the ocean and walk along the shoreline.

Sarah and I did the hike the year before, then laid out on the beach for a few hours. This year…. that was not possible. We had unknowingly come at high tide and the waves were reaching all the way to the cliff side so you had to walk right next to the cliff and even then the waves would crash into you and the wall reaching up to about mid-thigh height.

So that was an adventure!

Sometime later we changed into clothes, to attend the singles ward, in a grocery stores bathroom. Nothing says keeping the sabbath day holy like that! Jk it wasn’t that big of a deal but we still had a good laugh about it.

After singles ward we walked around the LDS San Diego temple and let the girls take some fun pictures there before we grabbed food at McDonald’s and then made our way to La Jolla beach.

Upon arriving at La Jolla, we discovered I had left my purse at the McDonald’s. 🙃 So once again we left La Jolla and drove the fifteen minute drive back.

I did find my purse with everything including my polaroid and all my money still in the bag!!!

*TIP: Travelers and people in general… DON’T FORGET TO PICK YOUR BAG UP OFF THE GROUND AFTER EATING!

La Jolla the second time around was a great way to end our Sunday, even though we didn’t stay to watch the sunset like we had planned on. We did get a good, few hours in of freezing due to the wind and laughing so loud the surfers probably heard us.

Today was the last day of our trip, the day we had looked forward to the most and it was by far the most interesting. Notice I didn’t say the most fun, but we’ll get to that later.

The Taysom family are some of the coolest people you could ever have the pleasure of meeting. 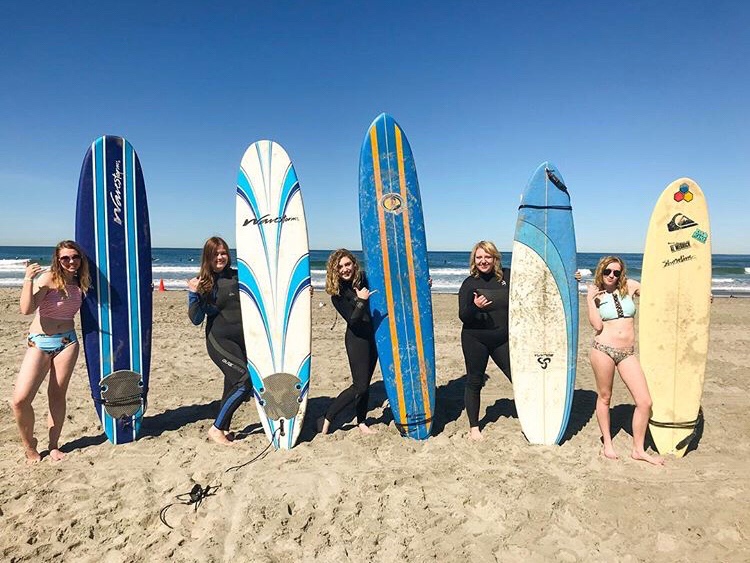 The last two years they have been so kind to come to the beach with us and use their surfboards to teach us and let us ride the waves like every sensible person dreams of doing.

Last year Sarah and I had a moment on the surfboards (not the kind you are thinking of) that we have treasured. Picture this. Two girls salt water soaked, sitting on their surfboards staring out into the sea with a sunset in the distance that lit the sky and water on fire with all of the rich colors it held. Yeah. It was that freaking awesome.

But the reason I bring this up is because this memory was what got us so excited for this day! And the chance to hit the House of Pizza about two blocks away and eat pizza while laying out on the beach like we did the previous year. Honestly I think was more excited for that moment!

The day went by quickly while we listened to “surfer guy” play his guitar and sing, laying out, and getting attacked by the swarm of bees that mysteriously appeared on the beach. Poor Julia and Sarah got stung while Lexi ran across the beach to escape from any bee that approached her.

Who would have guess that we could be stung by more than just bees! 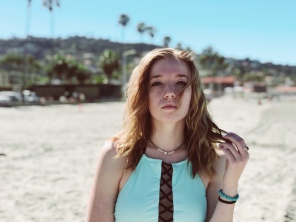 Sarah and Taylor had gone out to Surf with the help of some of the Taysom family when Taylor felt something under her foot and a sharp pain. She decided it was nothing after telling Sarah about it and continued to surf.

Later we discovered, after she had limped to us and we had taken her to the lifeguard tower, that she had been stung by a sting ray!

Taylor…. is not a very good patient. Taylor is the type of person that when in pain, she freaking laughs! And let me tell you we were joking around and laughing a ton while sitting there , soaking her foot in a bucket of hot water.

*TIP: the reason that they tell you, if you get stung or stabbed by something in the ocean, to pee on it is because heat pulls out the toxins that are now in your system. So if hot water or a hot tub is accessible don’t recreate the Friends episode okay?

Taylor is still limping around a week later and laughing all the time. Though I don’t think it’s as much for her pain as it is laughing at herself for her attempt at getting around! 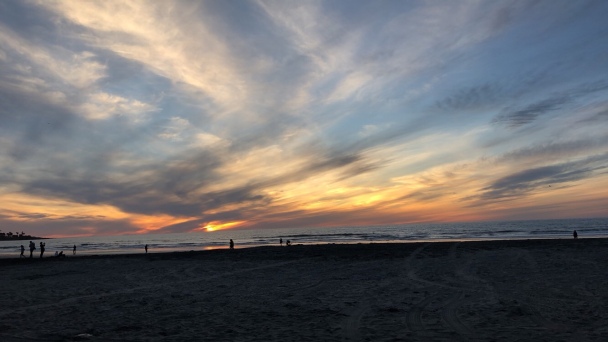 Honestly this trip was one of the most interesting that I have been on but I wouldn’t take away the memories and strengthened relationships with the girls for anything.

I am so lucky to have them in my life. Truly, I have some of the best friends a girl could ask for.